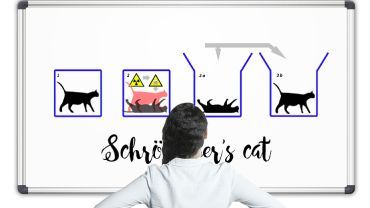 What Is Quantum Mechanics

Quantum mechanics attempts to explain the behaviour of subatomic particles at the nanoscopic level.

It is theorised that at the subatomic level energy can only be released and absorbed in discrete indivisible units called quanta.

This means electrons have fixed orbits around the nucleus of the atom as their energy comes in discrete amounts. When the electron gets excited or de-excited they will absorb or emit specific quanta of energy which will mean they leap from one orbit to another without inhabiting the space in between - this is called the quantum leap.

In essence, there are places within the atom that the electron will be likely to be and other places where they won’t as energy is being absorbed and released in discrete units.

There’s a famous experiment in quantum physics called the double-slit experiment which revealed that particles display both particle-like and wave-like behaviour.

In a version of the experiment, on a larger scale, we have a gun that shoots tennis balls one by one at a detector, which will register where the tennis balls land.

In between the gun and detector, we will place a barrier, with two slits, which will leave openings for any tennis balls to go through.

Over a period of time, and after many tennis balls, a pattern emerges on the detector indicating where the tennis balls have landed. The results show that the balls which have not been blocked, have landed directly behind the slits in the barrier.

If we replicate this experiment, but on the subatomic scale, and use electrons, instead of tennis balls we expect similar results.

But this is not the case.

Scientist’s found that when the gun shoots electrons one by one toward the detector and past the double-slit barrier the pattern that emerged on the detector looked like this.

The electrons landed not just behind the two slits but in narrow strips across the length of the detector and a significant number of electrons even landed straight behind the middle of the barrier.

The pattern that emerged is an interference pattern and is associated with the behaviour of waves.

So if we imagine that our electrons are less tennis ball-like and more wave-like then what happens?

This is a wave from above. The black lines represent a peak and the spaces in between are the troughs.

And here a peak and a trough meet cancelling each other out.

The interaction between the waves results in the interference pattern at the detector screen.

Erwin Schrödinger came up with an equation for the electron’s wave function and using this equation we can find out the probability of the electron being in a particular location.

Think of the wave as a bundle of probabilities and the size of the wave in any location predicts the likelihood that the electron will be found there if it is looked for. That is why on the detector screen we observe most of the electrons landing in the places where the electron’s wave is at its most intense.

It seems as if the electron is not in a fixed position but has different probabilities of being in many different places at once.

To observe the electron’s wavefunction going through both slits at the same time detectors were placed next to the slits to capture this activity.

But when this was done, something strange happened, the electrons stopped behaving like waves and went through one or other of the slits and landed on the detector screen to form the two striped pattern rather than the interference pattern.

It seemed as if the act of measuring did something to collapse the wave function.

The superposition principle states that while we do not measure the electron for its position, it is in all the possible positions it could be in at the same time and when we observe it the superposition collapses.

So in this illustration, when our detector is off our electron is in all of the possible positions or states it could be in simultaneously but when we switch our detector on the superposition collapses and the electron gives up all of its possible states to choose just the one.

I.e, the electrons actually reverted to particle-like behaviour and that is why instead of going through both of the slits the electrons that landed on the back of the detector chose to go through either one or the other of the slits.

Erwin Schrödinger described a thought experiment to further illustrate what quantum mechanics is saying about the electron and the superposition.

He described a scenario where a cat was placed in a covered box with a radioactive sample that has a 50% chance of decaying and killing the cat.

While the box is covered we have no idea if the cat is dead or alive and only once we open the box will we know if the cat made it or not.

So if the cat were similar to an electron, using the superposition principle, we would be saying that while the box was covered, and the cat was not being observed, the cat was both alive and dead at the same time in order for it to be in all the states it could possibly be in.

Only when we lifted the cover to observe the cat did its superposition collapse for it to be either alive or dead.

Obviously, this feels intuitively wrong and the reason why this thought experiment was employed was to illustrate how odd the laws of quantum mechanics are when it comes to describing the behaviour of particles.

However countless experiments have corroborated the results predicted by quantum mechanics;

it does indeed seem as if particles have a wave function and that particles are in all the states they could possibly be in, simultaneously, until it is observed.

But why do we see evidence of wave-like behaviour from electrons and not cats? After all, cats are made up of particles. Well, the reason is, the bigger the object the smaller its wavelength and at the size of a cat the wave is simply too small to be detected.

The predictions of quantum mechanics have proved so reliable that we cannot ignore the experimental evidence that corroborates the theory. The entire electronics industry is built on using quantum theory; those principles have led to the invention of lasers, transistors and the integrated circuit.

And that in a nutshell is quantum mechanics for beginners.