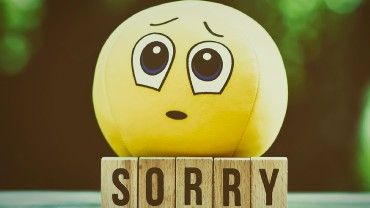 6 Tips For Forgiving Yourself For Past Mistakes

If that is the case I’m here to help you with that.

I is conversing with someone on Instagram who was talking about how they did something you know said they felt bad about stuff they’ve done in the past they’ve apologized lots they’ve grown from the situation and feel they’ve gotten stronger yet they still feel really bad about what happened a long time ago.

So I posed the question Have you apologized to yourself and the person said how do you do that.

So I’m here to help you with that.

I’m going to give you the six steps that you go through in order to be able to forgive yourself and move on from this situation that of which you’re still apologizing for.

So the first step is to acknowledge that you’ve done something wrong. Just being aware of whatever it is that you’ve done in the past that you’re obviously saying sorry for over and over again. It sounds like that part you probably already have covered but then the next step is to offer a sincere apology a sincere apology is more than just saying sorry there’s a little bit more work to it than that.

It’s designed to move forward and move you away from the experience that has occurred.

And if you’re not sure what the steps are for a sincere apology you can check out my post right there And then step number three is to acknowledge when you still feel awful and sad about what has gone on in the past.

Here is where the person in Instagram is stuck.

If you’re still saying sorry and sorry and still feeling bad about it it’s probably two things are going on here.

One is that deep feeling of shame shame is that awful thing that gives us all those thoughts of not being good enough not being worthy. Feeling like we’re a failure.

And so because it feels terrible.

Your mind wants to get rid of that feeling.

So when you say sorry to another person it’s almost like asking them to help get that awful feeling of shame to go away. Except there’s a problem there because no one can get rid of that feeling for you.

That’s where you have to do on your own or with the help of a therapist. And then the other thing that’s going on is in complete contradiction to the experience of your body trying to get rid of that awful feeling of shame.

And that is that your mind actually doesn’t want you to get over this situation your mind.

There’s another part of your mind that wants you to keep feeling bad about it in order to protect you from doing the same thing again in the future because there is this idea that if you were to forget about it and move on.

You might put yourself in the same situation and end up doing the same thing again.

Which then means that you would go through pain and the brain does not like pain.

So it’s always trying to move you away from there.

So you have this dichotomy and contradiction going on inside of you of one how this awful feeling of shame comes up and the body wants to get rid of that hence you say sorry over and over with the hope that that might solve the problem which doesn’t work and or your mind actually doesn’t want to get over this so that you never do it again.

So you’re going to have to prove to yourself that you can handle yourself now in the future and not have that problem.

And I’m going to discuss that more in just a moment.

And then the fourth step is that you need to offer yourself a sincere apology.

So again if you’re not sure what the stages are of a sincere apology you can check out the post right there and do it with you go through the steps and stages and apologize to yourself for whatever you have done.

And then the next one the fifth step after apologizing to yourself is dealing with the shame now shame is very deeply rooted comes from childhood days.

All that good childhood stuff and it is something you can grow through and grow away from.


And in this situation you’re mourning the fact that you’re not perfect. Which you’re not supposed to be perfect.

And again a lot of this ties into childhood programming when you come in the world and the world is very black and white.

There is this idea that you need to be perfect in order to experience love. Depending on the type of parenting that you can be you need to mourn the fact that you’re not perfect.

So going through the mourning process is also necessary to help you grow away from this feeling like you can’t get past the fact that you’ve made a mistake in the past.

And once you go through the mourning process then the end of that is acceptance.

Then once you feel acceptance that’s when you get to feel light and free and it’s ownership of yourself.

And it feels really good and freeing.