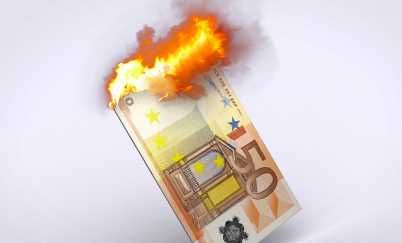 Next Market Crash: 5 Signs It's Coming

A few years ago, if you would say, let’s print money to make everyone rich, no one would take you seriously!

Yes, We can print money, but we should do that responsibly.

We cant randomly print money and just give everyone some cash.

That’s not how the economy works, leave alone capitalism.

Remember when Andrew Yang proposed the UBI Universal basic income, and people bombarded him with billions of arguments why that’s never going to work, but then 2020 is like - let me prove all of these people wrong.

The fed literally pumped over 3 trillion dollars into the economy.

Everyone got their stimulus checks, which they ended up spending on amazon buying useless stuff.

Well, not everyone, at the end of the day, most people had to put food on the table one way or another.

That suppose to cause huge inflation, right?

But it didn’t, at least for now.

The fed has been around for over 100 years, and it has created a lot of money since then.

However, 1 in every 5 dollars was created last year.

Throwing that much money into the economy suppose to create not just inflation but hyperinflation.

Have you seen pictures of people carrying bags of money just to buy bread or kids using cash to play around in Zimbabwe?

That’s what hyperinflation is. So why was inflation just a little over 2 percent last year?

Why does the fed keep printing even though it knows it can cause high inflation?

How the fed created the biggest financial bubble in history?

When is this bubble going to crash?

And how is that going to impact the stock market?

We will answer all of these questions and many more, but before we do that, give this video a thumbs and let the algorithm know that you enjoy our videos, and make sure to comment.

And now, let’s get right into it!

the biggest financial bubble in history

We have already explored how the economy works in previous videos, but let’s just have a quick recap.

The economy follows a cycle where it expands for a few years, then it peaks and slowly starts falling into a recession, and the job of the federal reserve is to make sure that inflation doesn’t rise too fast when the economy is booming by cutting the supply of money through high-interest rates for example, and when it falls into a recession, it makes sure that the recession isn’t too painful by flooding the market with cheap money to stimulate growth.

When interest rates are low, everyone jumps in to borrow money like in 2020.

Mortgage rates were so low that everyone who saved enough for the downpayment did take a montage to the point where economists are warning us of another housing bubble.

So, in the middle of a pandemic, when many people lost their jobs, struggled to pay bills, house prices are rising.

Because when too much money chases too little goods, prices increase, or the value of existing dollars fall.

The number of houses in the market didn’t change much, but since so many more people decided to take a mortgage, the demand increased, which is why prices increased as well.

But why is that a problem?

Every time we had a crisis, the fed stepped in and saved the economy by pumping trillions of dollars into the economy or lowering interest rates to the bare minimum.

It did that last year.

It pumped trillions more back in 2008 to prevent the economy from collapsing and the crises before that.

So some experts believe that we are living in a bubble that will sooner or later burst and takedown with it the entire economy.

Take a look at this chart.

Since we have abandoned the gold standard in 1971, inflation has been rising through the roof.

It’s rising as if there is no tomorrow, and with more stimulus bills, that chart will rise faster, especially when the fed pumped into the economy over 3 trillion dollars this year.

This means that today’s prices are 26.16 times higher than average prices since 1914.

Will that bubble burst this year, next year, ten years from now!

I don’t know, and no one knows.

The fed successfully kept the inflation at around 2 to 3 percent.

It might be able to do that for another 100 years, and what happens 100 years from now isn’t something we should be too worried about now.

But let’s find out if the stock market is overvalued today because if it, it’s going to crash, or at least we will witness a correction?

Will the stock market crash?

When the stock market crashed last year, why it suddenly jumped back and started rising?

Because the federal reserve lowered interest to 0 and started buying bonds.

A bond is basically a piece of paper that a government or a company issues that says if you buy this paper, I will owe this much money plus interest.

What if the interest is 0%?

I guess everyone would want to get that kind of a loan.

This means companies could suddenly borrow billions of dollars at almost 0 percent, so no matter how bad the crisis is, these companies could borrow money for free to survive.

The problem with that was that the fed even bought junk bonds, which means that it started loaning money to companies that suppose to go bankrupt but survived because the fed gave them a lot of money.

Think about what happens when the fed stops giving them money.

They will go bankrupt or at least be less profitable, which will drive investors away, which will push their stock price to fall.

In other words, the stock market is filled with overvalued stocks right now.

But that’s not all.

The fed even purchased bonds of the largest companies in the market, such as Apple, Microsoft, The home depot, and so on.

That’s one of the main reasons why the stock market rose dramatically.

You don’t have to be a genius to understand what happens when the fed stopps buying corporate bonds or raises interest rates.

Of course, that’s causing inflation, but the fed is comfortable with inflation even higher than 2 percent because if it did not step in to save the economy, the recession could have easily turned into a depression.

It would have taken us much longer to get out of the crisis.

Inflation is bad, but what you know, what’s more devastating than inflation is deflation.

When prices start going down, that looks like a good thing, right?

Why spend your money today when it’s going to be more valuable tomorrow?

And that’s the problem. In that case, everyone will start saving.

When no one spends, the economy will further get into a crisis, that’s why it was very important for the FED to step in and flood the market with cheap money because, during crises, people are afraid to spend since no one is certain about tomorrow.

At the time of writing this script, interest rates are still between 0-0.25 percent, but that’s not going to be forever.

Once everyone gets back to work, and we reach herd immunity, the fed will slowly raise interest rates, and the stock market will probably crumble.

I wouldn’t be supposed if all the companies that survived just because the fed purchased their worthless bonds to go bankrupt one after another, and the top 10 companies that make almost 1/3 of the sp500 to slow down.

Its really difficult to predict whats going to happen tomorrow, leave alone a few months from now, but the current administration is focused on another stimulus bill, so the market will probably keep rising at least until the summer.

If a correction would happen, it will probably be in the second part of the year, or maybe not this year, because the market doesn’t follow any logic.

Even if I bring up a thousand logical arguments why the market is overvalued, the market might take an entirely different direction. But it doesn’t hurt to be ready for such a crash.